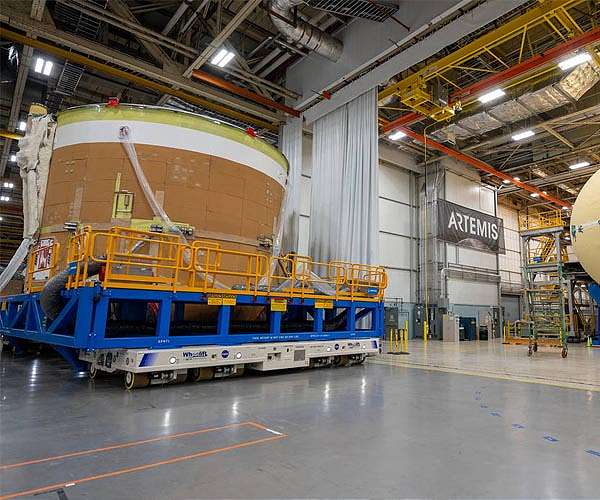 During final integration, the team will also install the remaining internal thermal protection systems and prepare to position the engine section from vertical to horizontal so that it can be joined with the rest of the central stage.

The engine section is located at the bottom of the core stage and includes the rocket’s main propulsion systems that connect to the four RS-25 core stage engines that will help launch the Artemis II lunar mission.

This fall, the engine section will be horizontally integrated with the previously attached nose assembly and liquid hydrogen tank to complete the center stage. NASA and Boeing, the prime contractor for the main stage, are building main stages for the next three Artemis missions.

The 212-foot main stage with its RS-25 engines will provide over 2 million pounds of thrust at launch. With Artemis, NASA will land the first woman and first person of color on the Moon and establish long-term exploration in preparation for missions to Mars.

NASA’s SLS and Orion spacecraft, along with the Commercial Human Landing System and Moon Orbiting Gateway, are NASA’s backbone for deep space exploration. SLS is the only rocket capable of sending Orion, astronauts and supplies to the Moon in a single mission.

Engineers at NASA’s Marshall Space Flight Center in Huntsville, Alabama have built some of the biggest rocket engines ever to light up the icy expanses of space. Now, Marshall and his business partners have delivered one of the smallest propulsion systems in its history, designed to help propel an upcoming NASA mission to shed new light on the Moon’s south pole – in search of a much more useful type of ice cream. Lunar Flashlight, no bigger than a briefcase, is an innovative and inexpensive CubeSat developed … read more