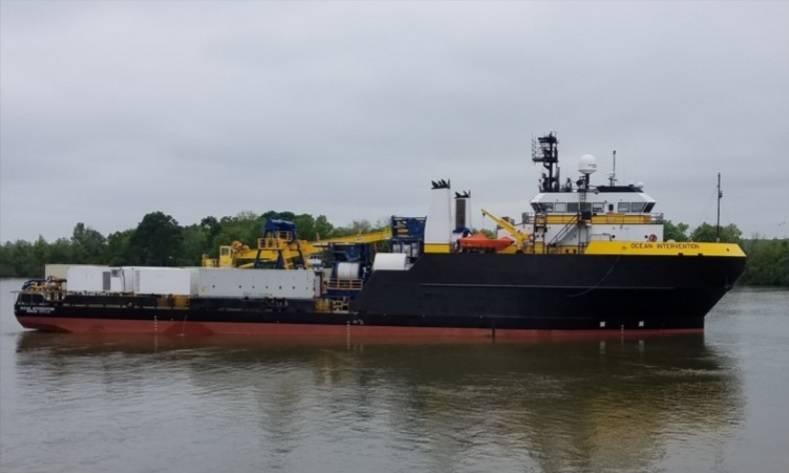 No pollution or injuries to the 16 crew members were reported in connection with the mechanical failure, which resulted in a fire in the engine room on December 19, 2020. The crew isolated the fire before they could. spread throughout the ship.

The Ocean Intervention, a 243-foot-long steel-hulled vessel, was built in 1998 and operated by Oceaneering International, Inc. The 2262 gross ton full-service vessel was designed to carry cargo, supplies, personnel and equipment. in support of offshore energy operations. It was equipped with specialized equipment, such as remote-controlled vehicles for underwater studies, inspections, maintenance and repair of devices such as pipelines, oil wells and other underwater structures.

At anchor, the Ocean Intervention crew had resolved speed variation issues with the number 1 and number 3 Caterpillar 3516B 16-cylinder diesel engines, which involved the replacement and calibration of several electrical components and several engine restarts. . Later, while carrying the vessel’s electrical load, the number 3 diesel generator suffered catastrophic mechanical failure. This caused the connecting rod of the number 1 cylinder to eject through the engine crankcase while it was running at rated speed. The ejection of the connecting rod allowed atomized oil to escape from the engine and ignite, causing a fire in the engine room.

The rapid and effective actions of the crew to prevent the spread of the fire allowed the fire to go out on its own without endangering the crew members. Damage from the ocean response totaled more than $ 3 million.

The probable cause of the diesel generator engine failure was a cylinder connecting rod bearing adhering to the crankshaft, which resulted in the connecting rod ejection and catastrophic engine damage, the NTSB determined.

“Engine rooms contain multiple sources of fuel as well as mechanical ventilation, making spaces particularly vulnerable to rapidly spreading fires,” the report said. â€œThe crew of the Ocean Intervention effectively controlled the spread of a fire by removing the sources of fuel and oxygen. Ship crews should familiarize themselves with and train frequently on machinery, fuel oil, lubricating oil and ventilation shutdown systems in order to act quickly to contain and extinguish fires in the forward engine room. they do not spread to other spaces and / or cause a loss of propulsion and electrical power.

Following the dismantling of no. 3 DG, and after reviewing the failure investigation report, the operating company turned to Caterpillar for advice on proactively making changes to the Model 3516 engines across its fleet. To provide increased lubrication to the engine bearings, pre-lubrication pumps have been installed on the engines to deliver lubricating oil throughout the engine for a specified period of time: after receiving a start signal and before the engine starts. engine does not begin the starting sequence. According to technicians, pre-lubrication systems were offered for the Model 3500 engines but were not required. Additionally, the operating company asked Caterpillar technicians to investigate the possibility of retrofitting the Model 3516 engines with oil mist detectors, as the manufacturer did not offer a kit or instructions. These protective devices are designed to trigger an alarm when a hazardous mist is detected in the crankcase, possibly preventing an engine explosion. According to technicians, Caterpillar has confirmed that it would be possible to equip the engines with oil mist detection systems.

Ocean Intervention’s maintenance and repair manager said the frequency of main and connecting rod bearing inspections on Model 3516 engines installed on ocean-going vessels would be reduced from 21,500 hours to between 10,000 and 12,000 hours to allow for inspection of bearings and replaced early in an over-cautionary fashion. The connecting rod bearings would be replaced after inspection, as they could not be reused after being opened. The main bearings would only be replaced during these inspections if they showed abnormal wear. Technicians said Caterpillar had no problem increasing inspections and following guidelines in the operational maintenance manual.