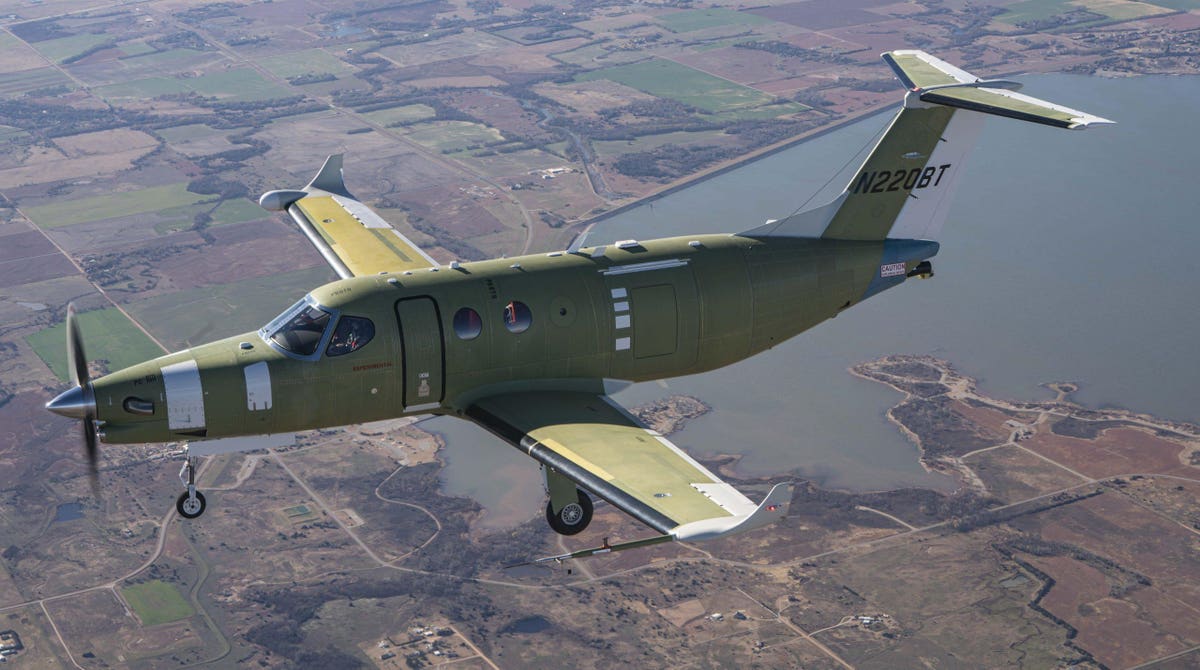 As most of us got ready for Thanksgiving, the new Beechcraft Denali made its maiden flight on Tuesday morning. The challenger to single-engine turboprop engines like Pilatus’s PC-12 and Daher’s TBM 940 is remarkable in itself, but the Denali is also breaking new ground with the first new clean-leaf turboprop to enter the business and general aviation market. in more than 50 years.

Beechcraft is General Electric Aviation’s launch customer
Catalytic turboprop engine. It is a new generation of turboprop engines according to GE, ready to offer a “radical change in performance” with up to 20% lower fuel consumption and 10% more cruising power than competitors of the same. size category.

The most obvious competitor, and the figurative elephant in the business / general aviation single-engine turboprop aircraft market, is the Pratt & Whitney PT6A family of powertrains. Pratt & Whitney has dominated the segment for what seems like ages with over 20,000 of its PT6A variants produced to date.

North America was the largest market for turboprop engines in 2019, according to Mordor Intelligence. In the general / business aviation segment, it accounted for around 50.3% of turboprop aircraft deliveries in 2019. It is also expected to grow with the highest CAGR through 2025.

Pratt’s privileged position in the turboprop market is a thorn for GE which, together with its joint ventures, remains the leader in the broader aircraft engine market (turbofans / turbojets), holding an overall share of around 55% according to Statista . Pratt comes in second with a 26% share.

The successful two-hour and 50-minute Denali flight quickly followed Catalyst’s first flight on a Beechcraft King Air test stand on September 30. The test bed flight took off and landed at Berlin Airport, drawing attention to its design. , development and construction entirely in Europe. Final engine assembly is expected to take place at GE’s Prague facility, with gearboxes sourced from Italy and other equipment sourced from different parts of the continent.

GE also introduces Catalyst as the first turboprop in aviation history made with 3D printed components. Using additive manufacturing, the engine’s designers claim to have reduced 855 separate parts to 12 parts. The reduction benefits engine weight, with the lighter powertrain requiring less fuel to achieve the same cruising speeds. An increase in the strength and durability of the components is also expected.

The Catalyst’s advantage in specific fuel consumption over its competitors offers several advantages according to GE: On the same routes / altitudes, a Catalyst-powered aircraft can carry 150 pounds of additional payload, adding one or more passengers. freight. For the same payload, the nominal aircraft can travel 145 nautical miles farther, fly 12 knots faster at the same fuel flow, or provide equivalent performance with a larger cabin.

Even if such claims are proven, Catalyst will have a lot of ground to catch up in the market, with Pratt & Whitney’s powertrain being a staple of single-turbo-prop engines including the Cessna Grand Caravan EX, Pilatus PC-12 NG / NGX, the Daher TBM 910/940, Piper M500 / M600, Epic E1000 and Kodiak 100, among others. It should be remembered that the PT6 variants also equip a range of helicopters, including Leonardo’s latest AW119Kx and its military training version, the Navy’s new Thrasher TH-73.

GE Aviation CEO Paul Corkery said Flying magazine, â€œWe feel good with this engine. It really lays the foundation for our future. Of course, I take my hat off to the competition. They are good. My job, you know, is to make life harder for them, but they’re very, very good.

Catalyst had been seen as a possible selection for the ATR turboprop commercial aircraft manufacturer, but Reuters recently cited industry sources as saying ATR would announce a new variant of the Pratt & Whitney Canada PW127 engines that power its aircraft families. with turboprop engines 42-600 and 72-600.

This does not mean that GE does not have other irons in the fire. In 2019, the company signed an agreement to supply the Catalyst engine as the core of a hybrid-electric propulsion system for the XTI TriFan 600 VTOL business jet. Using three ducted fans, the TriFan 600 lifts vertically. Its two wing fans then rotate forward for a transition to the initial climb and cruise 300 kts at 30,000 feet, then pivot up and back for a vertical landing.

The company sees Catalyst as a potential nucleus in a variety of other parallel and serial hybrid power plants for a new generation of aircraft. GE is also considering the military drone market with Medium Altitude Long Endurance (MALE) UAVs in mind. The development of the (pending) commercial certification of the engine means that it will be free from ITAR restrictions and therefore available for a variety of military applications.

The Denali’s maiden flight marks progress toward the aircraft’s planned certification in 2023 and with it the start of production of the Catalyst. The question of whether it can wrest market share from the next advanced versions of Pratt & Whitney’s PT6 remains a decisive question.