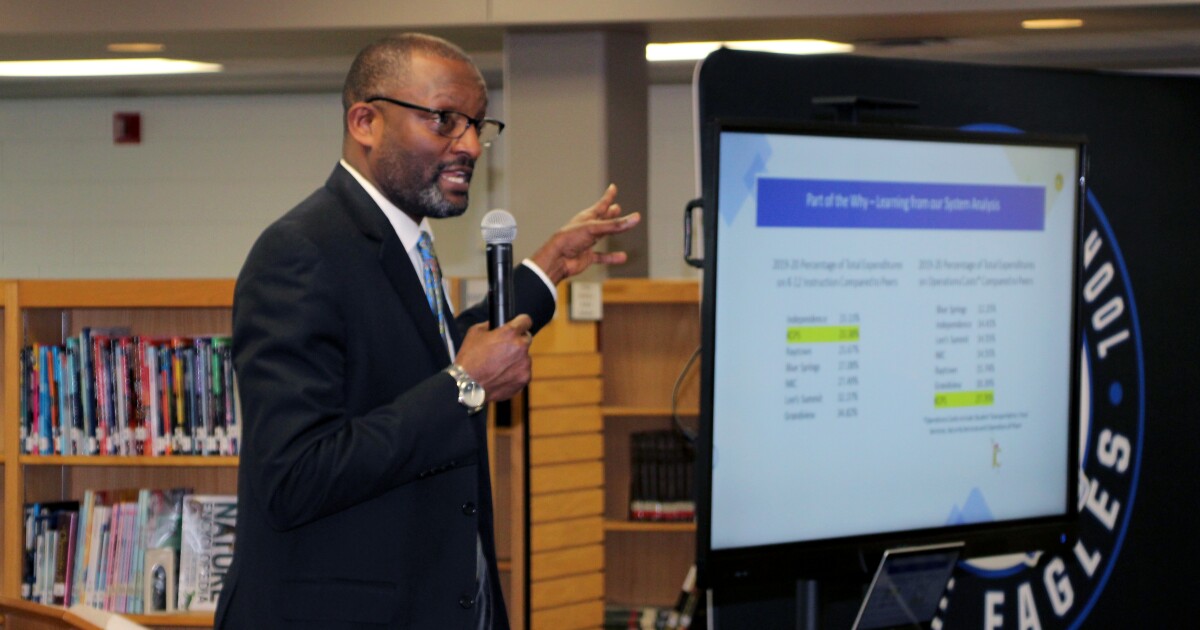 Kansas City Public Schools just got full accreditation this year, but they’re already working on the next one.

This week, the district continued community conversations with students, family and staff about Blueprint 2030, its multi-year strategic plan.

At Central High School on Monday night, district officials presented different “scenarios” for how its schools and programs might look like in the future.

“We won’t stay fully accredited if we don’t change and do things differently. What got us here will not keep us fully credentialed,” Superintendent Mark Bedell said. “So the work that we’re talking about doing now with Blueprint 2030 is to make sure that we have sustainable performance in this school district.”

Compared to other local school districts, KCPS says it spends significantly more on operating costs, such as transportation, food services and security. The school district spends nearly 28% of its operating expenses. Grandview School District, the closest district to spend that amount, spends only about 18%.

Bedell said that means less money is spent on what happens in classrooms and on students’ social, emotional and academic development.

He also noted that declining enrollment at many schools means fewer amenities and resources are available for students.

“I have secondary schools where we haven’t even seen more than 600 children since I’ve been here. So we were already small in 2016,” Bedell said. “And in some of our secondary schools, that number has dropped to 400. Now, how much can we offer these children?”

KCPS has compiled a list of opportunities that families and staff say they want to offer their students.

For those programs to materialize, district officials say it will take school closures and consolidations. At Monday night’s meeting, they came up with three different possibilities for how the neighborhood could be laid out. In each scenario, cost reductions would also be made at the central district office.

The first option would allow all the desired opportunities and programs for students, but would reduce the number of schools from 37 to about 25. This would mean the closure of about 9-10 elementary schools and 2-3 secondary schools.

“One of the reasons students leave Kansas City, in general, and move to the suburbs, has to do with some of the opportunities they may have after school,” Lange said. “So we want to make sure that students can get those opportunities here in Kansas City.”

In this scenario, the district estimates that it would save approximately $37.5 million each year that could be invested in its academic programs and opportunities. KCPS would still need about $172 million to deal with deferred maintenance, such as roofs and walls that need to be repaired.

Additionally, the district said it would also need $140 million for spaces for students to do more “project-based learning.”

The following scenario would reduce the number of operating schools to approximately 27 and save less money, or $32 million in savings. The district should pay more to operate the additional schools and should reduce or limit some of the opportunities offered.

A third possibility would keep 30 schools open, but reduce, limit or eliminate all available opportunities.

Since there are less cost savings in the latter two scenarios, district officials asked community members for feedback on which opportunities they would prioritize.

Caitlin Clark, president of the parent-teacher organization at the Foreign Language Academy, said she was concerned that a limited budget would make it difficult to implement programs equitably across different schools.

“Now you distribute a limited number of resources. So who gets what? asked Clark.

Some participants expressed concerns about the effect school closures would have on class sizes, transportation and the sense of community around some schools.

Others saw it as a necessary means of obtaining additional resources for students and possibly increasing enrollment.

KCPS graduate Tracy Pruitt said the high school she attended in the district has since closed. She says she understands the pain of seeing her alma mater close.

“But if we look at programs for our students, sometimes we have to take that hit in order to get the enhancement for what our students deserve,” Pruitt said.

Bedell acknowledged that because of the emotional attachment to the community, the district will need to think about how it strengthens schools and will need to continue to engage families and staff.

Yet he also noted that the plan “is not about school closures and consolidations.”

“It needs to be easier for our teachers and building administrators to have the resources and equipment they need to provide a full and robust experience for their children,” Bedell said.

Additional engagement sessions will be held Tuesday at 9 a.m. at the Manual Career Tech Center and at 5:30 p.m. at Northeast Middle School. A Spanish session will take place at 5:30 p.m. at Carver Dual Language School.

Further meetings will be held throughout the summer before recommendations are made in the fall to the district school board for review and approval.