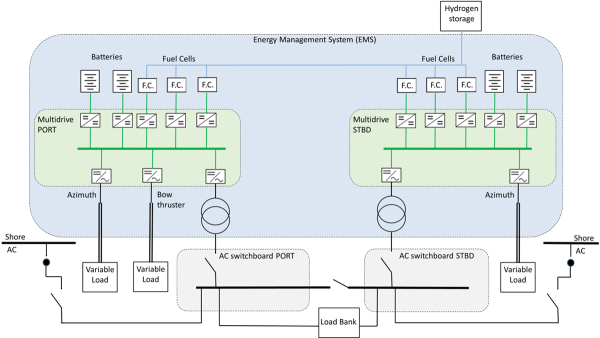 Kongsberg tested and verified a full-scale, full-scale, zero-emission transmission powered by hydrogen fuel cells designed for ships and ferries. The program is the third and final part of the EU-funded HySeas (HySeas III) project which has been underway since 2013 to prepare and demonstrate a scalable hydrogen system for ships and ferries. Kongsberg was the technical lead for the project, which involved participants from Scotland, Denmark, France, Germany, Sweden and England.

Such tests (string tests) involve assembling all the key components of the powertrain and testing them as a system, usually in the factory and before the start of construction of any vessel. This process is used to mitigate risk by fully validating the ship’s powertrain before committing to the full cost of building the ship. Strength and durability testing can be performed with minimal risk.

The HySeas III chain test consists of the following components:

The comprehensive test regime was designed by Kongsberg Maritime to determine whether the system would be suitable for handling and responding to demands that normally occur in normal offshore operations. These operating profiles will include the expected load changes during three modes: transit, port and maneuver. The extensive and exhaustive testing over several months is also intended to test the safety, load response, transient response and emergency situations of the system.

In this final step, Kongsberg built a large-scale electric propulsion system based on hydrogen fuel cells at Ågotnes, near Bergen. The system will now undertake a 4 month validation testing program to verify the final design of an H2-motorized RoPax ferry.

The tests reflect the operational loads that would be experienced by a ship on a route between Kirkwall and Shapinsay in the Orkney Islands. It will confirm operational safety and horsepower and fuel capacity requirements, as well as other valuable information to pass on to the vessel design team at Caledonian Maritime Assets Ltd (CMAL) in Scotland.

CMAL plans to complete the design in March 2022. The hydrogen fuel will be produced by wind power at the ferry port.