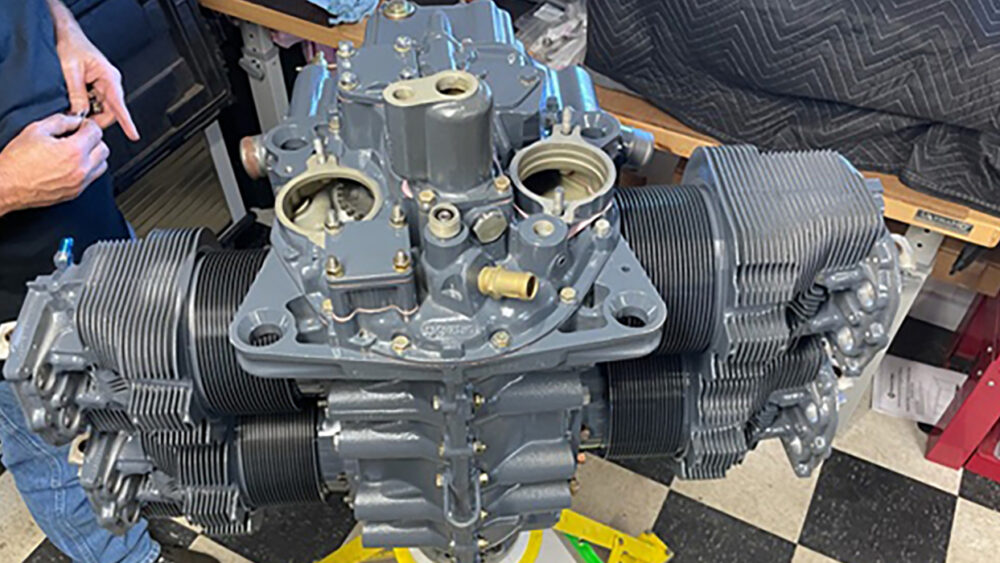 Growing up in an auto machine shop, as well as with an aviation background, Chris Collum was well prepared when he entered the Marine Corps as a crew chief on CH-53 Echo Super Stallion helicopters. . Having served from 1989 to 1993, Chris learned new skills and honed existing ones in his knowledge of aircraft engines.

He left the Marine Corps in 1993 and started working on cylinders for people as a side job, while also working in other aircraft shops, flight schools and things of that nature. . In 2009, he started working three days a week at Airworx Aviation, an aircraft engine machine shop located in Brewton, Alabama. The store opens its doors the same year. At the time, Chris was also working four days a week at another store – until 2015.

“In 2015 I had a snow skiing accident and this other store decided they didn’t need me anymore, so I started working four days a week at Airworx and have been doing so ever since.” , says Collum.

Today Chris is COO of Airworx Aviation, which has five employees. He is also the Responsible Officer, who handles communication with the Federal Aviation Administration (FAA) as Airworx is an FAA Certified Repair Station. The aircraft engine machine shop measures 3,200 square feet. and also includes a 500 sq.ft. clean room for engine assembly

â€œWe are one of the only aircraft engine shops in the country to do all of our machine shop work, assembly and subsequent testing, all in-house,â€ says Collum. â€œOur goal is strictly to machine the motors, get them running, and then send them back to customers. We’re not working on full planes or anything like that. It’s strictly the heartbeat of the plane.

“We do Franklin air-cooled engines, for which we are one of the only workshops in the world to have a Part 145 repair station to build these engines. We also do Lycoming Engines and Continental Engines also. These engines are what you would call opposing cylinder reciprocating engines, and they can be built up to around 550 cubic inches.

Airworx clients are a mix of individuals with planes and corporate employment contracts. Collum says most of the engines his shop works on are like big, glorified Volkswagen engines. He says there are a few differences in the engine models themselves, but they’re not too different from car engines.

â€œThe permissions are almost the same,â€ he says. â€œThe most important thing is the certification process. The paperwork and requirements that you need to complete to certify airplane engine parts are plentiful. You have to follow a lot of labels and certificates when making an airplane engine versus a Volkswagen or a Chevrolet 350. “

While all of the machine’s work is done in-house, Airworx will send a special process called cadmium plating and heat treatment. They also send in any overhaul work to be done on accessory components such as magnetos or carburetors. For the tests, the workshop has a dynamometric motor, but it is not yet fully installed. So Collum uses a racing stand and what they call club props, which use the same instrumentation that the aircraft itself would have in it.

â€œThe three engines we’re working on are all so similar,â€ he says. â€œThe tolerances on Franklin’s are much, much closer than those on Lycoming or Continental engines. And it is the engine that is probably the least supported when it comes to parts. We have to do a lot of different things on these engines. Continental and Lycoming, those two companies are still in business, so parts availability, tech support and things of that nature are pretty good for them. These two engines are more common in stores.

“These engines go into general aviation aircraft – everything from old Piper Cubs to Piper Navajos or Beech Dukes or Cessnas.”

Recently, as part of a 10 year contract between Airworx Aviation and one of its client companies, the workshop needed to overhaul a Lycoming O-360-C4P engine from a Piper Super Cub which had 2 000 hours on it.

â€œThe Lycoming O-360-C4P engine is a four-cylinder, 360 cubic inch, roller cam engine,â€ Collum explains. “This engine presented itself for an overhaul based on the time it had spent on it, which was just 2,000 hours. When the engine arrived, we completely disassemble the engine, we clean it, we do a visual inspection, and we do a dimensional check of everything, then we do all of our non-destructive testing (NDT) work.

â€œTypically we install new cylinders, but new cylinders have been difficult to find, so we will be taking and overhauling the old cylinders and installing new valves. We don’t do any performance mods. All of our work complies with federal regulations. We use spare parts from companies with manufacturing approval. We use Superior Parts a lot for things like bearings, cylinder kits, and most of the internal components.

After the machine work is complete, Airworx then uses a chemical coating on the aluminum parts called Alodine, which allows the paint to adhere to the aluminum.

â€œWe mask and paint all of our detail parts piece by piece separately rather than after assembly,â€ he says. â€œThen after everything is inspected for the last time, it all goes into the editing room and the editing guys jump on it. “

Accessories such as magnetos and carburetors are sent for overhaul to a repair station called QA. Once these parts come back they will go on the engine and Airworx will put in a new ignition harness from a California manufacturer and new Champion aircraft spark plugs before the engine is ready for the stand. race.

â€œThe engine will run for about four hours,â€ he says. â€œYou have to run the engines for a while at a certain rpm, so we go through all those rpm’s and that time and make sure that everything is within the scope of the overhaul manuals. “

Back in good shape, this Lycoming O-360-C4P engine is capable of 200 hp at 2,700 rpm, and it will help propel a Piper Super Cub aircraft that pulls tow planes off the ground and up to the altitude before releasing them.

Engine of the week is sponsored by PennGrade Engine Oil, Elring – Das Original and Scat crankshafts. If you have an engine that you would like to feature in this series, please email Greg Jones, Editor-in-Chief of Engine Builder at [emailÂ protected]