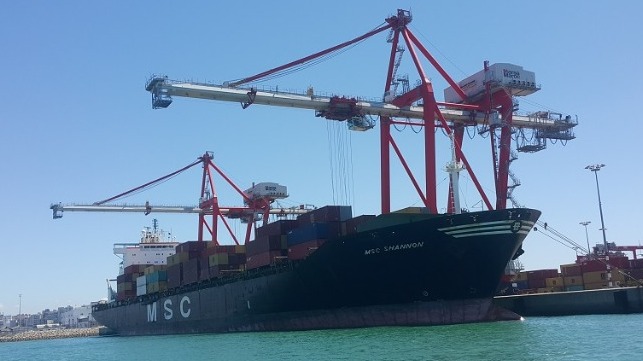 Sunday morning, the boxship MSC Shannon suffered a fire in the engine room at one position in the Gulf of Finland, neutralizing it and prompting a full-scale emergency response.

At around 2 a.m. on Sunday, the Finnish Coast Guard received a distress call from MSC Shannon report a fire in the engine room. The ship was located approximately 11 nm south of JussarÃ¶, a small island near the mouth of the Gulf of Finland. He had 24 crew on board and around 1,200 tons of containerized cargo – including dangerous goods like flammable liquids and oxidants – and was en route from Russia to Le Havre.

The Finnish authorities organized an emergency response, mobilizing the patrol vessels Turva and Uisko, as well as two rescue helicopters. However, the MSC Shannon the crew managed to control the fire on their own and did not require firefighting assistance.

At around 8:00 a.m., a maritime patrol aircraft made an overflight and found no signs of pollution. No injuries were reported on board the vessel.

Tracking provided by Pole Star indicates that MSC Shannon successfully anchored off Sommaro, Finland, where she stayed on Sunday evening. Janne RyÃ¶nÃ¤nkoski, a relief official for the Helisinki region, told local media that the shipowner was in talks to arrange an emergency towing. However, the MSC Shannon the crew will first attempt to make repairs and resume the voyage using the vessel’s own means.

As a precaution, the Finnish Coast Guard keep two patrol boats nearby until the ship can set sail.

MSC Shannon is a 1991 sub-Panamax cargo ship. She has a history of PSC failures including a three day detention at Le Havre last year for missing firefighting equipment, deficiencies in the familiarity of the crew with their propulsion, unsatisfactory waterproof and weatherproof conditions and problems with their fixed fire-fighting systems.