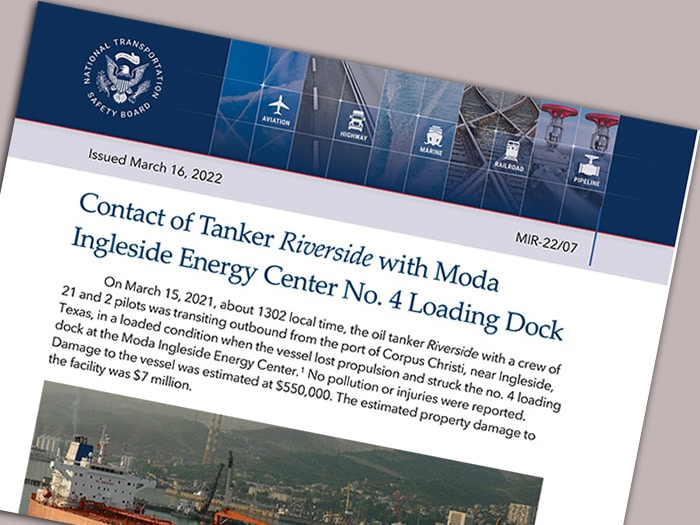 In another example of an engine problem leading to a big bill, the National Transportation Safety Board (NTSB) released its report into an incident on March 15, 2021 in which the 115,406 dwt tanker flying the Maltese flag Riverside made contact with a loading dock in the port of Corpus Christi, Texas. Although no injuries or pollution were reported, the contact resulted in $550,000 in damage to the vessel and $7 million in damage to the dock.

The NTSB determined that the probable cause of the contact was the ineffective assessment and incorrect solution of a main engine start problem by the ship’s operator and the ship’s engineers.

Owned by Glory Riverside Navigation and operated by Thome Ship Management, the 820ft, built in 2009 Riverside was powered by a single slow-speed two-stroke diesel engine, producing 18,184 hp and directly driving a single fixed-pitch propeller. The maximum speed of the ship was 15 knots. To change the direction of the propeller, the motor had to stop completely and then restart in the opposite direction. The main engine could be started from three locations: the bridge, the engine control room and locally at the main engine.

On the day of the accident, two pilots from Aransas-Corpus Christi Pilots boarded the river sidee to Corpus Christi to help maneuver the ship out of port. As it sailed away into the Corpus Christi channel, another tanker ahead Riverside was leaving too. The pilots of both vessels have agreed on the Riverside would slow down and allow the other vessel to leave the dock and exit the harbour. The pilot ordered a series of engine commands to slow the ship, including stopping; the Riverside began to veer to port and a starboard rudder command was ineffective. The pilot ordered at full speed to increase the water flow on the rudder, which required the engine to be restarted. The engine failed to restart several times. Without propulsion, Riverside’s maneuverability was limited and her port bow struck the mooring dolphin and gangway at the end of the loading dock.

The ship had left Brazil for Corpus Christi on February 16 and the crew had no problems starting and stopping the engine. During the trip, no problems were found with the main engine.

the Riverside switched the main engine fuel supply to low-sulphur marine gas oil on 11 March. On March 12, after arriving off the coast of Corpus Christi (Port Aransas) at 5:48 a.m., the engine was secured and the Riverside drifted while the crew awaited the arrival of the pilots to bring the ship back to port. After drifting for approximately 5 hours, at 10:30 the bridge watch officer on the bridge attempted to start the main engine in preparation for entering port, but it did not start. The chief engineer switched control of the engines to the engine room and successfully started the engine in forward mode, but it did not start in reverse mode. The chief engineer restarted the engine at the local command, but the engine rpm was too low for proper operation, so the engine was secured to resolve the cause. During the crew’s evaluation of the engine to determine why it was not starting properly, they discovered that the low sulfur marine gas oil cooler had not been started, but after starting from the cooler, the engine still did not start.

Although the engine started successfully, both front and rear, the cause of the engine start failure was not properly identified or corrected, leaving the engine unreliable to meet demands. generally encountered during transit in a commercial port. According to the engine manufacturer‘s technicians, engaging the limit cancel mode had no effect on starting the engine.

The NTSB determined that the probable cause of the contact was the company and the flight engineers’ ineffective assessment and incorrect solution of a main engine starting problem, neglecting fouling of main engine no. 6 pneumatic starting actuator valve in the starting air distributor. The presence of moisture and the lack of routine draining of the air start system contributed to the accident, which allowed the accumulation of hardened grease in the air start actuator valve.

On vessels fitted with slow-propelled diesel engines, starting and stopping the main engines is an essential function for efficient maneuverability. The NTSB has investigated multiple accidents involving pneumatic low-speed engine starting and control systems and, in particular, air actuation valves in the systems. Vessel operators must ensure that their crews are equipped with the resources and training necessary to perform prompt and thorough engine maintenance and repair. If the root cause of an engine running problem cannot be determined, it is essential that a Chief Engineer and Vessel Owner/Operator have the cause of the problem assessed and determined by a Diesel Technician. The reliability of ships depends on the complete resolution of equipment malfunctions and anomalies when they occur.