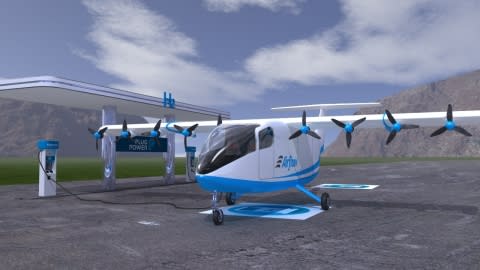 SAN FRANCISCO, October 13, 2021– (BUSINESS WIRE) – Airflow, an aerospace company that builds a next-generation short take-off and landing (eSTOL) electric aircraft, today announced an investment from Plug Power Inc. (NASDAQ: PLUG), the one of the main suppliers of hydrogen engines and fueling solutions for electric mobility. As part of this new partnership, the companies are co-developing and certifying a hydrogen fuel cell propulsion system designed for a new generation of sub-regional aircraft. Working with Airflow is part of Plug Power’s continued strategy to bring its proven ProGen hydrogen fuel cell technology to new markets, including a variety of missions and aircraft types within the aerospace industry. This partnership also strengthens Plug Power’s ambitions to build a hydrogen economy and achieve its 5-year roadmap of $ 1.2 billion defined in 2019.

Airflow recently secured over $ 600 million in Letters of Intent (LOI) from eleven airlines operating sub-regional aircraft. With an initial fleet replacement strategy, Airflow intends to accelerate the time to market of these carbon neutral aircraft, offering airlines several options to match the best propulsion solution to their missions. This flexibility allows Airflow to respond quickly to customer demand and expand the application of hydrogen as well as other carbon neutral propulsion solutions, including batteries and Sustainable Aviation Fuel hybrid solutions. Plug Power will also serve as Airflow’s preferred hydrogen supplier, opening up more opportunities for Plug Power’s hydrogen refueling infrastructure to co-locate at customer airports. This work is an extension of Plug Power’s ongoing partnership with Albany International Airport, where their hydrogen fuel cell solutions power ground support equipment.

Since partnering with other aerospace pioneers, including Universal Hydrogen, Plug Power has embarked on a rigorous effort to tailor its ProGen-based hydrogen fuel cell specifically for aerospace applications. This technology allows the Airflow Model 200 aircraft to fly missions up to 500 miles with nine passengers or 2,000 pounds of cargo with zero carbon emissions.

As part of this program, Airflow and Plug Power will integrate and test a large-scale ground-based powertrain prototype. Following this successful ground demonstration, the teams will then modernize the powertrain in an aircraft with the ultimate goal of certification.

“Over the past few years, we have increased our commitment to the aerospace market. From our investment and partnership with Universal Hydrogen to our acquisition of EnergyOr, we know it is essential to ensure that our ProGen solutions meet aviation’s ultralight and rigorous certification requirements. to our appropriation of this opportunity, ”said Andy Marsh, CEO of Plug Power. “Airflow represents another essential pillar of our aerospace strategy. In order to establish a complete ecosystem for the aviation market and enable a global transportation system powered by green hydrogen, it is essential that we work with players from all classes of aircraft who deeply understand the unique applicability of hydrogen in an industry as weight sensitive as aviation. We view the development and certification of a system for Airflow Part 23 aircraft as an ideal entry point into the aerospace market that allows for expansion into larger aircraft programs.

“Plug Power is a welcome and natural partner in the clean aviation movement. Not only can they produce and supply affordable green hydrogen on a large scale, but they are also at the forefront of supporting experienced aerospace companies tackling the variety of missions and aircraft classes required for them. ensure that our industry is rapidly improving its carbon footprint, ”said Marc Ausman, CEO and co-founder of Airflow. “This initial Plug Power investment is important to our ongoing development work at Airflow and we are delighted to have an industry leader in the hydrogen economy supporting our ambitious goals. We see hydrogen fuel cell technology as a key part of our next generation energy. which, together with sustainable aviation fuel-based hybrid systems and advanced battery systems, allow us to offer the flexibility to our customers to deliver an aircraft that best meets their individual mission needs and their operational objectives. durability. “

Plug Power is significantly expanding its aerospace fuel cell system capabilities, in line with the Company’s vertical integration strategy. As part of this effort, Plug Power is expanding its ProGen platform for other aerospace applications, including drones and airplanes with different weight restrictions and other unique requirements.

Airflow was founded in 2019 by five former members of the Airbus Vahana team to bring eSTOL capabilities to the sub-regional aviation market. The team is passionate about expanding the benefits of aviation and has extensive experience in aerospace and technology development. The founding team’s experience includes companies like Airbus, Eclipse Aviation, Northrop Grumman, Uber Elevate, Airware and Scaled Composites. For more information, please visit: https://www.airflow.aero/

About the power plug

Plug Power is building the hydrogen economy as a leading provider of complete turnkey hydrogen fuel cell (HFC) solutions. The company’s innovative technology powers electric motors with hydrogen fuel cells as part of an ongoing paradigm shift in the electricity, energy and transportation sectors to combat climate change and energy security, while offering efficiency gains and achieving sustainability goals. Plug Power created the first commercially viable market for hydrogen fuel cell (HFC) technology. As a result, the company has deployed more than 35,000 fuel cell systems for electric mobility, more than anyone else in the world, and has become the largest buyer of liquid hydrogen, having built and operated an expressway in the hydrogen across North America. Plug Power offers a significant value proposition to end customers, including significant environmental benefits, efficiency gains, rapid refueling and reduced operating costs. Plug Power’s vertically integrated GenKey solution connects all the critical elements to power, power and provide services to customers such as Amazon, BMW, The Southern Company, Carrefour and Walmart. The company is now leveraging its know-how, modular product architecture and core customers to expand rapidly into other key markets, including zero-emission road vehicles, robotics and data centers.