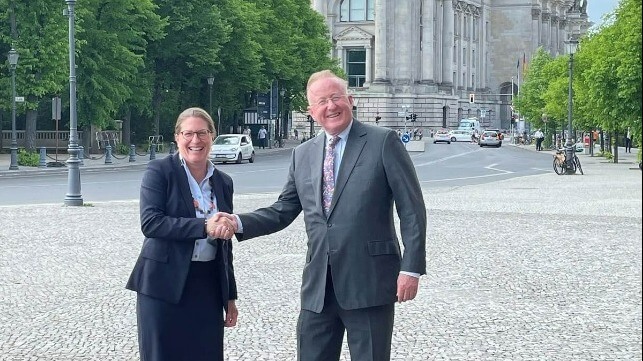 General contractor Damen Naval and RENK have signed a contract for the supply of gearboxes and innovative electric propulsion systems, initially for four new Class 126 (F126) frigates for the German Navy.

In the process, the Augsburg-based propulsion specialist is continuing its decades-long cooperation with the German Navy. Ships such as the previous F125 and F124 classes are equipped with RENK gearboxes. RENK also has a long and successful partnership with Damen Naval, one of the most innovative shipbuilding companies in the world. This has included building frigates and offshore patrol vessels for the navies of the Netherlands, Mexico, Morocco and Indonesia.

RENK gearboxes are equally sophisticated and simultaneously connect each diesel engine to its driveshaft. The propulsion system specialists from Augsburg not only supply the gearbox, but also the advanced RENK electric drives (AED). These electric propulsion motors drive the propellers either individually or in conjunction with the diesel engine. This is the first time that the German Navy has used this propulsion concept.

The CODLAD configuration offers a proven and ideal combination of increased power density, reduced noise through soft bearings and flexible couplings, as well as low weight and low installation height. The upgradeable second stage of the AED will now be installed on the F126 frigates. RENK has optimized important aspects of the drive system for naval applications. As a result, the design meets the low noise levels specified by the German Navy. This makes new frigates difficult to detect, especially in the lower speed range covered by the AED.

RENK manufactures the F126 gearbox and drive components with strong German added value. As a proven supplier to the Navy, RENK has been closely involved in the F126 project since the first project studies, when the ship was still called “Multi-Purpose Combat Ship 180 (MKS 180)”. In June 2020, the Federal Office for Equipment, Information Technology and In-Service Support of the Bundeswehr (BAAINBw) finally awarded the contract to build the four ships to Dutch shipbuilder Damen as the contractor. general. Damen Naval will deliver the approximately 166-meter-long frigates to the German Navy as a general contractor with its subcontractors Blohm + Voss and Thales. The ships will be built entirely in Germany at the Wolgast, Kiel and Hamburg shipyards. The first ship will be delivered to Hamburg in 2028. The contract includes an option for two more frigates.

The products and services described in this press release are not endorsed by The Maritime Executive.