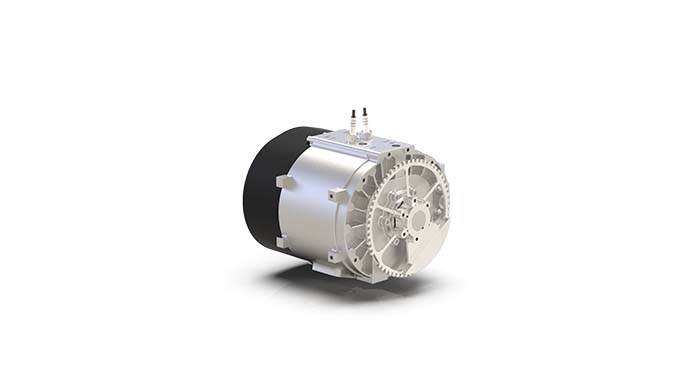 Sky Power International’s SP-180 SRE single disc wankel motor is now offered for heavy fuel oil (HF) applications. This wankel motor is a hybrid electric motor with a compact design and a top-notch power-to-weight ratio. It was first introduced to the industry in 2017 and has since been installed in a wide range of drone applications.

Heavy fuel oil SP-180 HF SRE is a modified version of the original gasoline engine. This modification includes the SP-180 SRE with all auxiliaries and additional preheating equipment to compensate for the higher flash point of kerosene and to maintain cold cranking capability. Thus, the engine is equipped with the kerosene heating control unit (KHU100), the engine / water preheater (WPH100) and the fuel preheater (FPH100). The KHU100 controls the entire fuel and engine preheating process before, during and after operation. This unit heats the fuel preheater cover as well as the WPH100. The WPH100 â€‹â€‹is used as a heater to preheat the engine water cooling system. To function, the heavy fuel oil SP-180 SRE needs a kerosene / oil mixture with a ratio of 200: 1 (Jet A1: Aspen 2-stroke oil). Engine cooling is
provided by water cooling of the crankcase and oil cooling of the rotor, allowing reliable operation under
severe environmental conditions.

SP-180 HF SRE heavy fuel oil can be used as a direct drive hybrid application or as an electric power generation mode. With hybrid boost power, an additional 15 kW is optionally available for direct drive, depending on the capacity of the on-board battery. Conventional generators as well as starter generators are available depending on the application and customer requirements, the latter to be connected to a 48V battery pack with the preheater unit. The battery capacity and peak current must be large enough to provide the current needed to preheat the engine and start the combustion cycle.

â€œHeavy fuel engines have a long history with us, as we have offered our two-stroke engines in this configuration for a very long time. Today we are delighted to be able to use our wankel engine for this type of fuel, as well as for military applications, including NATO’s single fuel policy â€, explains Karsten Schudt, Managing Director of Sky Power GmbH. The development of heavy fuel oil SP-180 SRE was due to increasing market demand, requiring a dense, economical and reliable heavy fuel oil system.

About Sky Power
Sky Power International is a leading manufacturer of 2-stroke internal combustion and wankel engines for UAS (unmanned aerial systems) and hybrid applications. In addition to in-house development and manufacturing, Sky Power International produces all engines in Germany. Personalization, new developments and continuous improvement in the performance of combustion engines are constant development objectives of the company.
More information: www.skypower.online