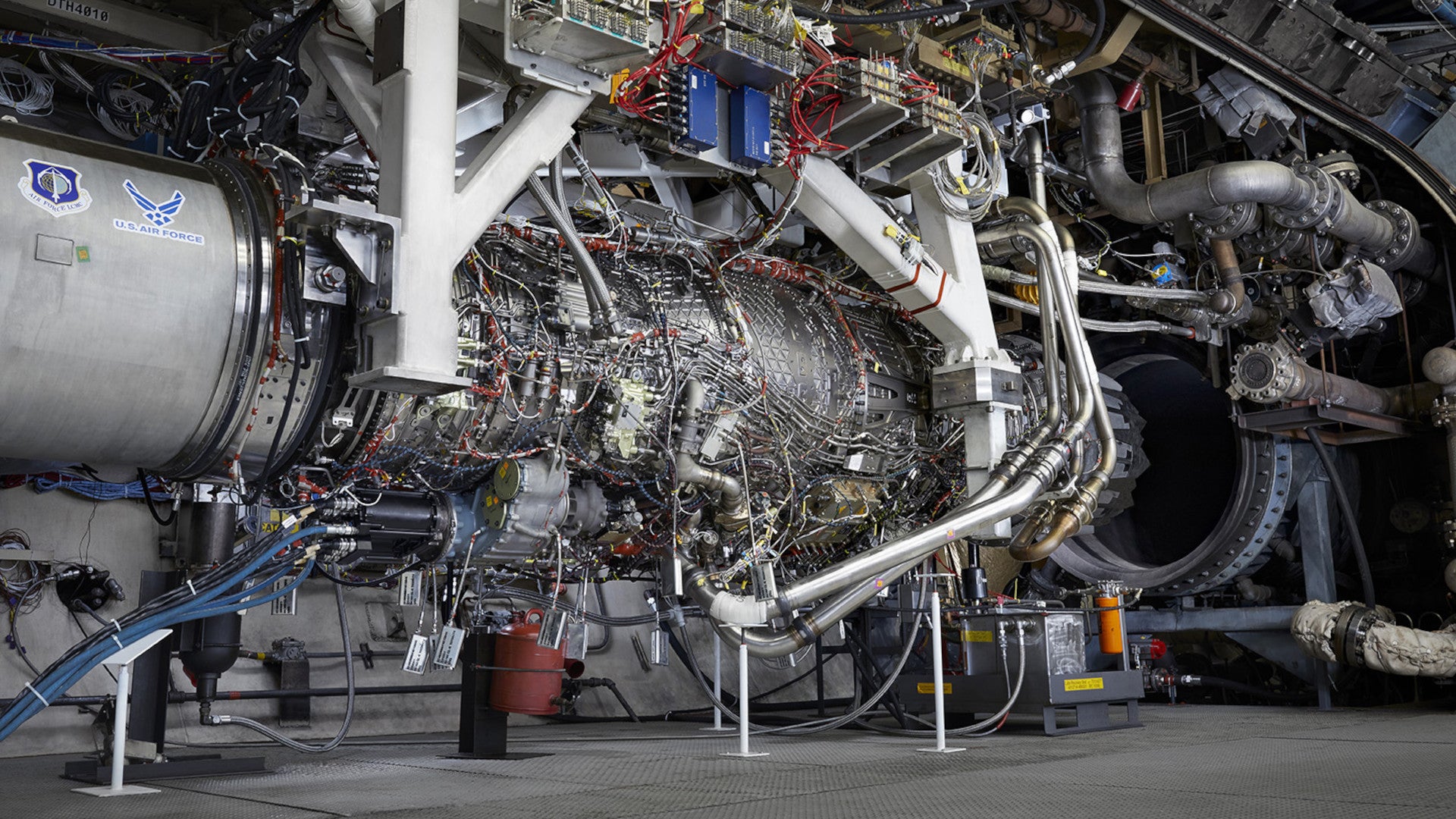 The US Air Force recently awarded contracts to five different companies, each worth up to close to $1 billion, for work related to the Next Generation Adaptive Propulsion, or NGAP, program. That engine should at least power the sixth-generation manned stealth fighter being developed as part of the larger Next Generation Air Dominance, or NGAD, effort. The fact that Boeing, Lockheed Martin, and Northrop Grumman were among the NGAP contract recipients shows that the Air Force is opening the door to potential new engine suppliers and underscores the ongoing competition around the overall design of the aircraft. new-generation manned aircraft that these engines are expected. in power.

The Air Force Life Cycle Management Center at Wright-Patterson Air Force Base in Ohio awarded the NGAP contracts Aug. 19, according to the Pentagon’s Daily Contracts Announcement. Each of these prizes was valued at $975 million. In addition to Boeing, Lockheed Martin and Northrop Grumman, General Electric and Pratt & Whitney have also received NGAP contracts.

The main details of the five contracts were described in essentially identical fashion in the Pentagon notice, each stating in part the following:

“[The contractor] was awarded an indefinite delivery/quantity contract with a program cap of $975,000,000 for technology maturation and risk reduction activities through design, analysis, bench testing, prototype engines and weapon system integration. The contract is for the execution of the prototype phase of the Next Generation Adaptive Propulsion program and focuses on delivering capabilities enabling propulsion systems for future air-dominant platforms and the digital transformation of the propulsion industrial base. The work … is expected to be completed by July 11, 2032.

None of the NGAP entries in the Pentagon advisory mention NGAD or work on an actual aircraft. However, only General Electric and Pratt & Whitney are currently manufacturers of fighter jet engines. They also happen to be the two main suppliers of engines for US military fighter jets.

The awarding of contracts to Boeing, Lockheed Martin and Northrop Grumman is therefore interesting on several levels. The fact that the Air Force is looking to explore the potential benefits of direct engine competition between these companies, which most likely compete on the NGAD manned combat aircraft airframe component, and General Electric and Pratt & Whitney, is not the least.

In June, Air Force Secretary Kendall revealed that “we still have competition” when it comes to developing the NGAD manned aircraft, but did not elaborate. At that time, Kendall also said he expected the project to go through a very traditional development and acquisition process. The comments followed an announcement earlier that month that this part of the NGAD’s manned combat aircraft portion had entered the engineering, manufacturing and development (EMD) phase. In aerospace, among other industries, EMD is generally considered the official start of the development of a particular system.

NGAP is also part of NGAD, which consists of a multitude of different projects aimed at developing various next-generation tactical air combat capabilities, including new weapons, sensors, networks and combat management capabilities, as well as aircraft with and unmanned. Although often described as a fighter aircraft, the future sixth-generation manned aircraft will be different from previous fighter designs. By all indications, the design will emphasize stealth, range and payload together over extreme maneuverability.

Specific details about the proposed NGAP engines, or the aircraft they might be integrated into in the future, remain extremely limited. The entire NGAD program is also highly classified.

The Air Force has disclosed in the past that there is a direct link between the Adaptive Engine Transition Program (AETP) and the NGAP. General Electric and Pratt & Whitney each developed advanced engines under AETP, known as XA100 and XA101 respectively. Although designs differ in specifics, both engines feature a “third stream” of airflow that can be dynamically switched between modes intended for better fuel efficiency or performance, depending on the situation. You can read more about the AETP and the XA100 and XA101 designs here.

The immediate goal of the AETP was to develop potential new engines for variants of the F-35 Joint Strike Fighter. On this front, in the current state of affairs, General Electric recommends re-engining the F-35s with its XA100s, or their variants or derivatives. The company said the XA100 will increase the range of the F-35A and C variants by up to 30 percent, while delivering acceleration and fuel economy increases of around 20-40 percent and 25 percent, respectively. All of this, of course, would depend on specific loadouts, mission profile, and other factors.

Pratt & Whitney is currently offering a less intensive upgrade of the F135 engines found on all existing and production Joint Strike Fighters rather than pushing its XA101. Pratt & Whitney also manufactures the F135.

Secretary of the Air Force Kendall publicly came out in favor of the full replacement option, although he stressed that this was his personal opinion. The F-35 Joint Program office is still investigating options, and cost and compatibility issues will likely be major factors. More importantly, none of the AETP engine designs, at least as they currently exist, will physically fit inside the F-35B short takeoff and vertical landing variant. The B versions have much tighter design constraints with regard to their internal configuration due to their large vertical-lift fans and hinged engine exhaust nozzles, which any new engine would also have to fit into.

At the same time, the Air Force also warned of potentially severe negative impacts on the US jet engine industrial base if none of the AETP options are pursued.

“Part of the industrial base would start to break down,” John Sneden, who heads the AFLCMC’s propulsion directorate, told reporters at a press briefing earlier this month, according to Defense News. “If we end up with a supplier there, if we don’t move forward with the AETP, that supplier can actually get us to a place where we have, essentially, a reduced advanced propulsion industrial base.”

“We need a decision, and that’s where I’m at right now,” Secretary Kendall had separately said at a rally at the Potomac Officers Club in July when asked about the AETP, according to Air Force Magazine. “I don’t want to limp, spend R&D [research and development] money on a program that we can’t afford or that we’re just not going to get agreed between the different departments. »

With all of this in mind, it is no surprise that the Air Force is interested in expanding its potential field of engine suppliers and seeking to promote competition among the expanded array of companies. This does not preclude the potential for varying degrees of interaction between NGAP recipients, or others, with respect to this program, as well as the future sixth-generation “fighter” of the Air Force and other elements of the NGAD program.

While Secretary of the Air Force Kendall has spoken repeatedly over the past few months about wanting to move away from development cycles with high risks of never producing tangibles and back to more traditional acquisition programs , it also left the door open for more innovative approaches within this context. Just asking new companies to come up with engine options for NGAP and seriously exploring the supply chain and other considerations that go with it could lay the groundwork that could have longer term benefits for America’s jet engine industrial base.

Either way, when it comes to the NGAP, as well as the aircraft these engines go into, a win-win outcome is highly unlikely. Some of the research and development work done by the “losing” companies on either of these projects could very well be incorporated into the final designs as part of a larger team effort. This could help speed up engineering and procurement processes, as well as spread cost and risk. General Electric and Pratt & Whitney would be in an excellent position to provide critical production capacity even if their designs don’t win either.

On these latter points, funding the development of AETP engine variants or derivatives, for any company, under NGAD would simply provide additional cover against any course of action regarding the re-engining of the F-35 that the Air Force, as well as the Marine Corps or the Navy, eventually pursue. At least in the past, it was understood that the decision of whether or not to go ahead with the AETP for the Joint Strike Fighter should come no later than 2024. This is also when the Air Force was to down-select. to a single design for the manned component of the NGAD.

Different plans suggest that, if the AETP course of action is chosen, at least some F-35s could start receiving the engines between 2027 and 2030. This would be well within expectation, as stated in the notice. the Pentagon’s procurement contract, that the initial phase of the NGAP’s work would be completed by 2032.

All in all, it remains to be seen what will become of the NGAP effort and the broader competition surrounding the manned component of the NGAD program. How the AETP’s decision on the F-35 might impact all of this also remains an open question. The Air Force has in the past raised the possibility that variants or derivatives of an AETP design could also be found on older fourth-generation fighters.

What is clear is that there is very active competition regarding the NGAD “fighter” project, including on its engine. The NGAP contracts separately show that there is definite potential to further disrupt the status quo when it comes to powering these jets, as well as others.

All told, the Air Force continues to lay the groundwork to bring into service in the 2030s the design it will ultimately choose as its next-generation combat aircraft.