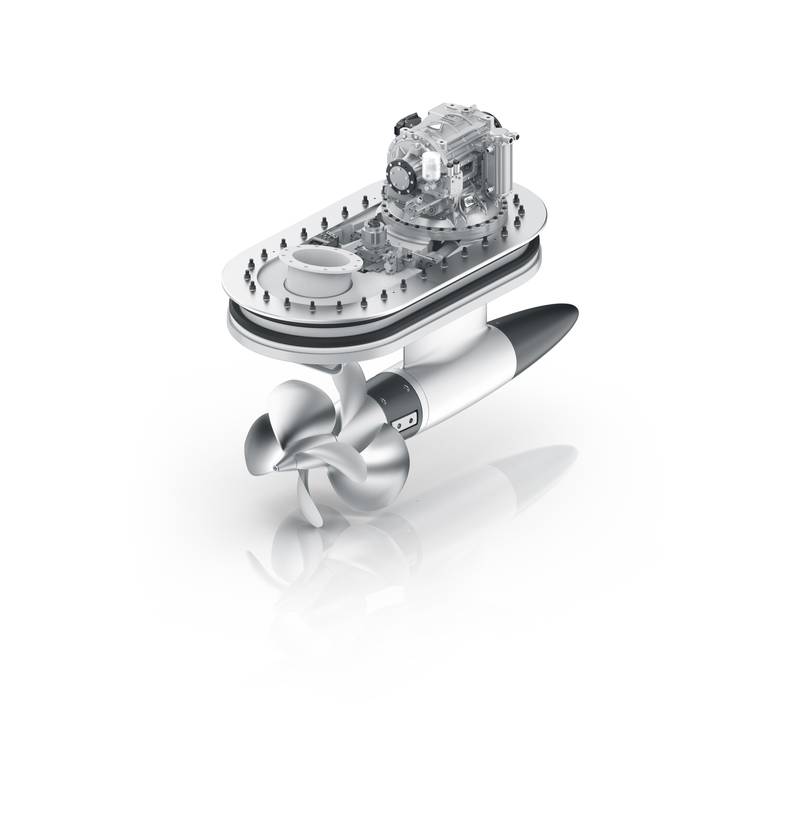 Marine drivetrain specialist ZF has announced that it will showcase its new 4600 POD propulsion system for large vessels for the first time in North American markets at the Fort Lauderdale Boat Show (FLIBS) this week.

Designed for large pleasure and commercial vessels with planing and semi-displacement hulls ranging from 80 to 130 feet, the 4600 POD propulsion system set sail for the first time in Azimut’s Grande 26M motor yacht l last fall, but was not available outside of European markets until now. The system is compatible with all major OEM engines up to 1700 hp at a maximum of 2450 rpm.

The 4600 POD propulsion system can be configured in a two-unit (for vessels 80-100ft) and three-unit (for vessels up to 130ft) installation, depending on the application. For pleasure craft, this includes both planing and semi-displacement yachts; commercial applications include pilot boats, supply vessels, small ferries as well as patrol and rescue boats.

The 4600 POD has an optimized hydrodynamic shape that significantly reduces drag from submerged parts, ZF said, noting that this supports contra-rotating propellers and improves the overall horizontal thrust of the propulsion system.

Featured inside the newly designed 4600 POD gear. Its 2.434:1 gear ratio allows for larger propellers (up to 38.5 inches in diameter). Compared to other pod systems on the market, the 4600 POD system is up to twice as powerful while consuming up to 15% less fuel than a traditional shaft line propulsion system, a declared the manufacturer. On larger vessels, the 4600 POD system allows designers to reduce the number of POD units typically required to achieve the desired speed, thereby reducing the complexity of on-board systems as well as vessel drag. Overall, the system’s streamlined design and contra-rotating propellers are optimized for top speeds between 20 and 32 knots.

ZF noted that the 4600 POD propulsion system also gives shipbuilders more freedom during the design phase. Engines can be mounted further aft, reducing the length of the engine room and thus increasing the space available for accommodation on pleasure craft and providing larger working areas on commercial vessels. Compared to conventional shaft line systems, the 4600 POD’s mounting solution with large rubber seals reduces structural vibration and therefore structural noise. The engine can also be installed on more flexible elastic supports since it does not have to absorb the thrust of the propeller.

The system comes with an integrated exhaust and clutch which eliminates the need for an additional gearbox. ZF also provides integrated hydraulic steering and state-of-the-art TotalCommand controls that include the iAnchor dynamic positioning feature. Plus, the PODs are hybrid-ready – a much-sought-after feature in an era of stricter emissions regulations in ports and other waterways.